History of How the Program Started and Evolved

La Ligue de l’Enseignement (Education League) was created in 1866 by Jean Macé, a teacher and journalist.

His goal was to encourage cooperation among people of different social backgrounds. He believed that, by helping each other and understanding each other, people could become better citizens. La Ligue’s mission is to give equal opportunities to everyone to become better global citizens.

In 1953, the transfer of an entire 5th grade class to visit another region of France took place as part of a French Ministry of Education experiment. The idea was to get students who lived in a city to experience and understand life in the country and vise-versa. Since that time, classes have been sent to different regions of France as a regular part of the French curriculum.

La Ligue program continued to expand over the years to include countries all over Europe and eventually in 1978 to include the USA. Over the past century, La Ligue de l’Enseignement, a branch of the French Ministry of Education, has organized “transplanted classes” in France and in foreign countries all over the world. These exchanges are enjoying great success, to the benefit of every student, family, school and community they touch.

History of French American Cultural Exchange Program in the USA

In 1978, Jackson Public Schools, in Jackson, Michigan invited two 5th grade classes, from the Parisian suburbs to come to the United States for three weeks. They were accompanied by their regular school teachers from France. The students continued to pursue their studies while here in the USA with a focus on their English lessons and learning about the American Culture. The French children and teachers were hosted by American families. The success of these “transplanted classes” evolved into a reciprocal exchange experience known as the Back-to-Back program. Why is it called Back-to-Back? Back-to-Back describes how the American families host the French children and if the American children travel to France they would be hosted by the French family of the child they hosted here in the USA.

The Back-to-Back program is based on the belief that immersion in the correspondent’s culture, visiting a different country, and learning how “the other half” lives, gives the students, from both sides of the Atlantic, the opportunity to learn, grow and to establish life-long friendships.

Over the years, participation has expanded to include 4th – 12th grade students. 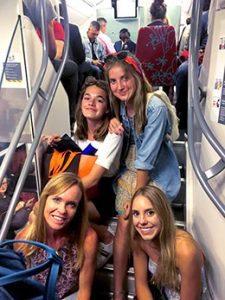 How Does The Exchange Work?

Learn more about how the exchange works.